Big Five: Who’s at the top? 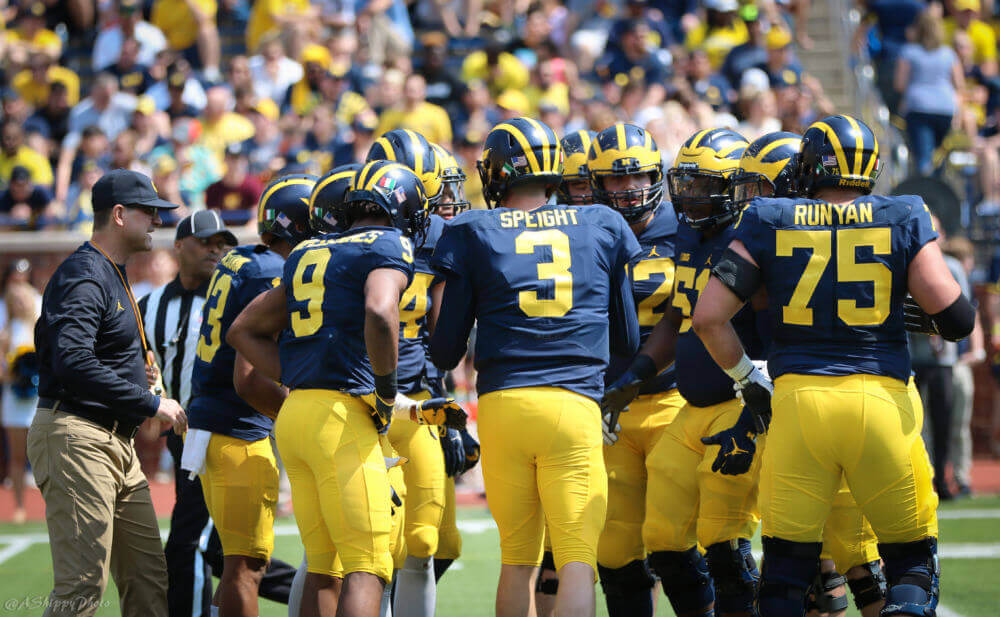 Welcome to the Big Five! This is my weekly column discussing and take-ing on the top five headlines, news items, storylines, etc. of the week. Feel free to comment on my thoughts either below, on Twitter, on Facebook, or…shoot us an email – internsbigten@gmail.com – We’ll make sure to bring your comments up in the next podcast.

Indiana took the Wolverines to overtime on Saturday in Bloomington, where Michigan prevailed 27-20. Boy, was that concerning to watch from a Michigan standpoint. The Wolverines couldn’t move the ball whatsoever on offense, but their defense kept them afloat. That’ll be a worn-out phrase come the end of the season.

Since the national championship, the Big Ten has built up a four-team power construct of sorts, which includes Michigan, Ohio State, Penn State and Wisconsin. The construct took a hit in week six, and it’s just about gone following week seven. Michigan State hopped over the Wolverines in the latest AP poll, and many are wondering where Michigan stands in the Big Ten.

So where do the Wolverines stand as of now? And how acceptable is this from Harbaugh’s standpoint? Michigan was built for 2018, but is an 8-4 2017 season okay?

Michigan has yet to play Penn State, Wisconsin and Ohio State. Luckily for Wolverines fans, UM’s other contests consist of Rutgers, Minnesota and Maryland, all favorable contests. I’m not worrying from a Michigan standpoint, but if the Wolverines drop either three of their favorable games, that’ll change.

The Nittany Lions have been a trendy team to watch all season. Trace McSorely’s deep-ball style, SaQuon Barkley’s freakish athleticism and James Franklin’s unfiltered word-dispensing have all lept Penn State’s name to national headlines and highlight reels. The team is fun and good, and now No. 2 in the latest AP poll.

But a grueling schedule stands in Penn State’s way of a Big Ten Championship appearance, and perhaps a No. 1 national ranking. In the next three weeks, the Nittany Lions will face Michigan at home and then both Ohio State and Michigan State on the road.

Brace yourselves, Nittany Lions fans. If Penn State makes it out of this stretch alive, the sky is the limit, for both PSU’s potential and James Franklin’s cocky rhetoric.

Right behind Penn State at No. 5 is Wisconsin. They don’t have the flashiness of Penn State and Paul Chryst has the polar-opposite personality of James Franklin, but the Badgers have been getting the job done.

Wisconsin could easily finish the season undefeated. But that record may be about as delicate as Iowa’s 12-0 regular season mark in 2015. The only challenge remaining on UW’s schedule is Michigan at home, which appears to be much more winnable now than at the season’s inception.

If I had to bet on it, the Badgers will make it to the Big Ten Championship undefeated. Their schedule is about as hard as stopping Michigan’s offense.

4. Can Northwestern save its season?

Now Northwestern faces Iowa. The rest of the schedule includes Michigan State at home, Nebraska on the road, Purdue and Minnesota at home, and concludes with Illinois on the road. All of those are winnable games!

The Spartans are 4-1 and face Indiana at home this weekend. Indiana isn’t a bad team, so this isn’t a gimme win, but a game Michigan State will probably take. The same thing goes with its road matchup the following week against Northwestern.

If MSU takes those two games, its final stretch will be quite interesting. The Spartans then face Penn State at home on Nov. 4 and Ohio State on the road Nov. 11. A 6-1 Michigan State squad could easily hover around the top 10 spot come Week 10. The idea that this proposition isn’t terribly far-fetched is something Spartan fans should be overjoyed about.